Twelve years before, he’d skipped town, bailing on what was supposed to be their wedding day.
She’d been wrecked. Totally devastated. But she’d also had other things to worry about, like the very public implosion of her life and the baby Owen had left growing inside her.

Now, years later, all Andy wants is stability for her daughter and for the past to stay buried, where it belongs

But when Owen shows up, Andy knows all her carefully buried secrets stand to be uncovered.

Owen Monroe left home at eighteen and tried not to look back. Though the memories of the girl he’d planned to spend his life with haunted him, he swore he’d never forgive her. Until, that is, he finds out the truth about what really tore them apart.

Oh, and that she had his baby all those years ago. His daughter, Jenna.

Now it’s up to him to earn her trust back and he’s willing to go to any lengths to do it. 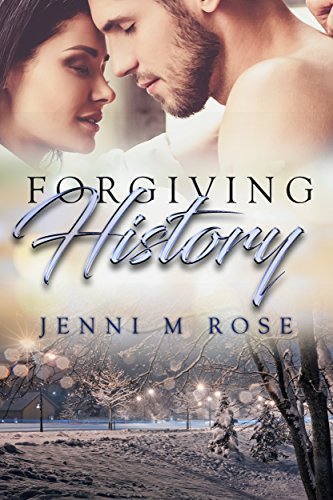 It’s been a long road for Andy Walker and Owen Monroe, and they’ve finally made it the big day. Their wedding.

But it wouldn’t be a real wedding without a few hiccups. Between Andy’s stripper filled bachelorette party and Owen going missing, there’s more than enough action for this wedding to go down in the history books. It’ll take the help of their family and friends to get them to the altar and when they finally make it, it’s everything they always hoped it would be.

Tune in for Andy and Owen’s Happy-Ever-After!

Plus, see what happens when Beth and Logan come face-to-face after their split in Forgiving History! Beth Walker knows Logan Hallowell is the man for her – has known from the minute she laid eyes on him.

She also knows she’s not the woman for him.

They’ve spent the last year dancing around each other; Logan taking one step forward, Beth jumping two steps back, until she comes home from a months-long work detail and Logan is not the man she remembers. She’s willing to put herself back in Love’s crosshairs to get him back on his feet again, because a world without the Logan she fell in love with is no world at all.

When Beth suggests they take a road trip, something to take his mind off his tanked career and lost future, Logan grudgingly agrees and gets more than he bargained for. He starts to realize that maybe it hadn’t been love at first sight between them like he originally thought. Maybe it took long hours in a car together, sleeping in a tent side by side, and candid admissions at the Grand Canyon to fall head-over-heels for Beth Walker.

But her confession changes everything and Logan finds himself caught between the only dream he has left for his future and the woman he loves. Just when Alexa Walker has given up on finding her happy-ever-after to focus on her career as the Bad Girl of Sweets, in walks Dylan James, steaming cup of coffee in his outstretched hand.

Alexa has never been the nice sister.
She’s the snarky one. The skeptic. Unapproachable.
That’s probably why everyone was so surprised when she offered to carry a baby for her sister, Beth. Making up for a decade-long feud is bound to take some sacrifices and after finally burying the hatchet, Alexa is ready to put her best sisterly foot forward.

Upper crust, old Boston money, and part of the infamous Boston Billionaires Club, Dylan doesn’t have a lot of free time and he definitely doesn’t have time to hang around a coffee shop that’s not even in his neighborhood, waiting for the Bad Girl of Sweets to deliver her weekly confections. He doesn’t have time until he sees her and knows he needs to make the time. She’s fiery and fierce, witty and bright, and that was only their first introduction. Suddenly, chocolate croissants aren’t all Dylan’s craving.

Dylan isn’t exactly sure what he’s getting into with Alexa Walker, his Bad Girl of Sweets, but he knows he’ll take her any way he can get her. Pregnant with someone else’s baby or not. She has all the money she could ever need, but it hasn’t bought her happiness.

Elliot Williams hates Julia Hawkins, sight unseen. He doesn’t need to see her to know she’s a house-stealing, rich snob.
That’s why he’s spent weeks avoiding her calls. She wanted to buy his grandmother’s old house right out from under his nose? Then she could find someone else to fix all the issues with it.

When his little brother goes over his head and takes the job, Elliot is furious.

Until he lays eyes on her.

Elliot is unlike any man Julia’s ever wanted, his growling masculinity and clipped words sending shocking shivers down her spine. His molten silver eyes watch her every move and he seems to know what she needs before she does. It’s as unnerving as it is eye-opening and Julia begins to realize that love might not be such a foreign concept after all.

What follows isn’t enemies to lovers. It isn’t insta-love. It’s two complicated people with complicated problems finding their forever in the most unlikely place – right at home. No Love Left Behind

Mercedes Charles was horrible. Spoiled, rich, and entitled, the world, and everyone in it, was hers to use and throw away.

Until one moment changed her life forever.

Seven years and one felony prison sentence later, Mercedes is nothing more than a bad memory and in her place lives Sadie; a down-to-earth dog trainer who wants nothing more than to live in the country with her best friends, her dogs, and pretend her old life doesn’t exist.

But her brother has other plans, and when he sends his best friend and Sadie’s girlhood crush, Lincoln Greene, to her house with a big, dopey dog in tow asking for her expert help, she knows she should say no.

Lincoln is neck deep in her old life and everything she’s tried to distance herself from since being released from prison. He’s one-quarter of the infamous Boston Billionaire’s Club.

Mostly, he’s everything she’s ever wanted but could never have.

Lincoln always had a thing for Mercedes. A thing he could never explain because she was, for all intents and purposes, a terrible human being. But one conversation with Sadie and he finally gets a glimpse of the heart and soul that’s always lurked behind those dark eyes.

As she lets him in, little by little, everything clicks into place and it becomes clear that Lincoln might just be the one person that sees Sadie for who she is, not who she was.

But the scars from her past run deep and there’s someone out there that believes Sadie hasn’t paid nearly enough for her crimes.

And they’re willing to go to any lengths to make sure she pays. Between the whole talking to ghosts thing and being a people hating recluse, Rosie’s not exactly enthused when she finds herself falling for Max, the sexy farmer that lives next door. She already has enough problems without adding relationship drama. But when a terrifying vision knocks her off her feet, she needs a safe place to regroup and finds Max stuck to her like glue and steady as a rock.

Suddenly, Max is at the center of the fragile life she’s built, but he has no idea what a freak she is and he definitely doesn’t know that Rosie isn’t her real name. If he finds out about her dark past, she stands to lose everything – the tiny slice of life she’s created for herself, her carefully manufactured identity, and the soft heart she keeps under lock and key.

Max Murphy doesn’t really have time to get sidetracked by the mysterious Rosie, whose quiet eyes mesmerize him from the get-go. But, there’s no way he’s not going to offer to be the refuge she so clearly needs, even if he can tell she’s hiding something. From the second they meet, he knows there’s something special about her. Rosie doesn’t believe he’s in it for the long haul, but Max has a feeling that she wouldn’t know what the long haul looked like if it jumped up and bit her on that delectable ass.

He’s willing to wait and show her just what forever could look like if she wanted to reach out and grab it. All he has to do is scale the walls she’s built around herself, tackle the demons that haunt her day and night, and help her solve a decades old murder. Dead and Buried: Where the Bodies Lie

Someone is killing women in the streets.

When their spirits begin haunting Happy, a talented young psychic, she must choose between hunting a killer and helping them find peace or securing her own future.